The Devils Bible. A unique manuscript from medieval times. Issued by Equatorial Guinea.

The Codex Gigas (English: Giant Book) is the largest extant medieval manuscript in the world. It is also known as the Devil’s Bible because of a large illustration of the devil on the inside and the legend surrounding its creation. It is thought to have been created in the early 12th century in the Benedictine monastery of Podlažice in Bohemia (modern Czech Republic). It contains the Vulgate Bible as well as many historical documents all written in Latin. During the Thirty Years’ War in 1648, the entire collection was taken as war booty by the Swedish where it can be seen today. 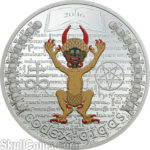 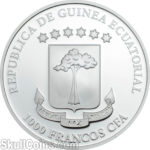 $99 – Coin comes encapsulated, in Box and with Certificate of Authenticity

We are the exclusive importers/distributors of this coin for North America.
Please contact us directly for wholesale inquiries.